Applications of Nuclear Techniques in Industry

A seminar titled, “APPLICATIONS OF NUCLEAR TECHNIQUES IN INDUSTRY” was organized by Pakistan Nuclear Society (PNS) with financial support from Pakistan Science Foundation (PSF) at the Nuclear Institute for Food and Agriculture (NIFA), Peshawar on 26th May 2021. The objective of the seminar was to disseminate information about huge financial benefits of using nuclear techniques in agriculture and industry, taking into account the related issues of radiation safety, their viable solutions and recommendations.

The seminar started with recitation from the Holy Quran. The welcome address was delivered by Director NIFA, Dr. Gul Sanat Shah. He lauded the efforts of PNS for arranging this seminar at NIFA even in the presence of logistical limitations posed by COVID-19 restrictions. The introductory remarks were made by President PNS, Dr. Imtinan Elahi Qureshi. He appreciated the research work being done in NIFA and other three agricultural Centers of Pakistan Atomic Energy Commission (PAEC). Recalling the achievements of these Centers over the last five decades in producing beneficial crop varieties, he noted that the food security is as important for national survival as the security of country’s borders. He applauded the work carried out by the scientists and engineers of PAEC in the service of the nation and declared them unsung heroes. He elaborated the role of PNS in highlighting the achievements of nuclear scientists, engineers, agriculturist and medical doctors. He said that PNS was a symbol of professional identity for the nuclear community in Pakistan and it would continue to project their R&D work at national and international level along with providing support and guidance in matters related to their own welfare.

In Food and Agriculture, Dr. Yusuf Zafer, former Chairman Pakistan Agricultural Research Council (PARC), emphasized the importance of food security, which encompasses production, nutritious value, storage and distribution and sustainability. He noted that mutation breeding of crops requires appropriate adaptation in accordance with soil and climatic conditions in different geographical regions. He stressed the role of water resources in enhancing crop productivity, which can be best monitored using stable isotope ratio analysis methods. Public and private sector comparisons in agriculture and food industry were highlighted mentioning that the applications of nuclear technologies in Private Sector are very limited.

Dr. Syed Javaid Khurshid, Sr. Research Fellow, Center for International Strategic Studies (CISS), talked about the peaceful uses of Nuclear Technology in the sector of Power Generation. He presented detailed analysis of nuclear energy production and provided an insightful comparison of economic viability among different energy sources such as hydro power, nuclear and fossil fuels. Highlighting the advantages of nuclear power production over coal, gas and oil generated power, he showed that nuclear power is more cost effective and environment friendly as compared to fossil fuels. He also described nuclear power plants of different capacities and their country-wide installation in chronological order.

Dr. Shamshad Ahmad, IAEA Consultant, presented a review of across-the-board uses of radiation technology covering its applications in the field of medicine, agriculture and crosslinking of polymers that served humanity by uplifting standards of health and environment. He elaborated his personal experiences as radiation chemist and as an entrepreneur in the commercial utilizing of polymer chemistry. Some salient features showing the superiority of radiation processing over competing technologies were also presented.

Mr. Waqar Ahmad Butt, Former Minister (Technical), in his presentation emphasized that enormous value addition in gemstones is possible by using different treatments like thermal heating, electron beam exposure, gamma rays or neutron irradiations. It enhances ornamental qualities of gemstones by adding different colors and in certain stones like topaz, 30-40 times value can be added by neutron irradiations. The research reactor at the Pakistan Institute of Nuclear Science & Technology (PINSTECH) has the capability for neutron exposures that are necessary produce long-lasting desirable colors. He emphasized that handsome amount of revenue can be generated and even foreign exchange can be earned by utilizing this technology.

The presentation of Dr. Tariq Yasin, Registrar, Pakistan Institute of Engineering Applied Sciences (PIEAS) was related to radiation uses in different processing industries. He noted that fire-resistant materials made from polymers and rubbers can be produced by radiation cross-linking. Applications of radiation technology for production of materials including sterilized food, cross-linked materials (wire, cables and tire rubber), superabsorbent hydrogel, polymer grafted products, wound dressing and plant growth promoters were described in detail.

All the speakers highlighted the contributions of Scientists from PAEC in different areas of peaceful uses of nuclear technology. The seminar was conducted with full observance of safety protocols for COVID-19 and relevant SOPs. At the end, vote of thanks was given by Dr. Mazullah Khan, Head Food and Nutrition, NIFA. He appreciated all those who put their efforts to make the seminar a success. 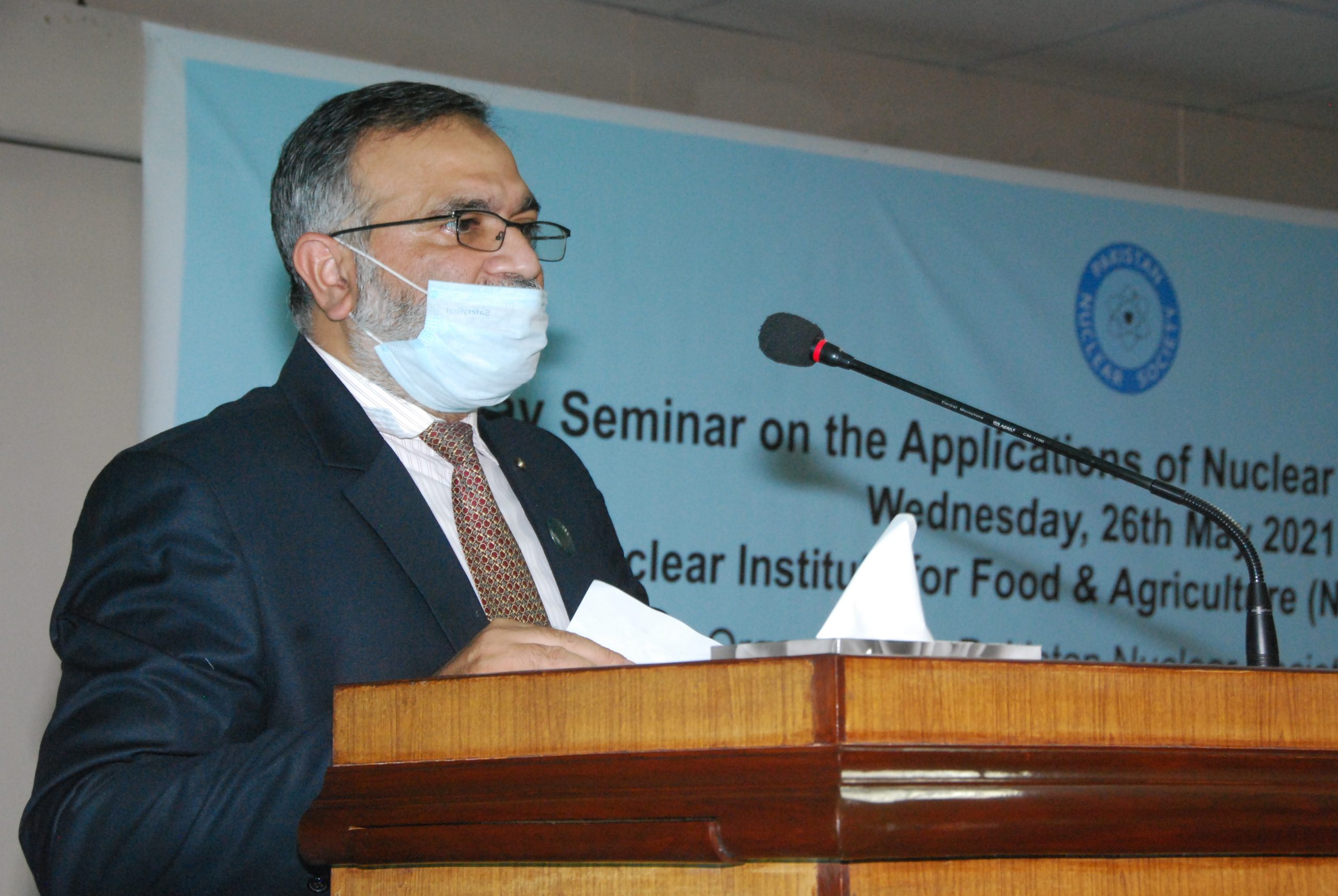 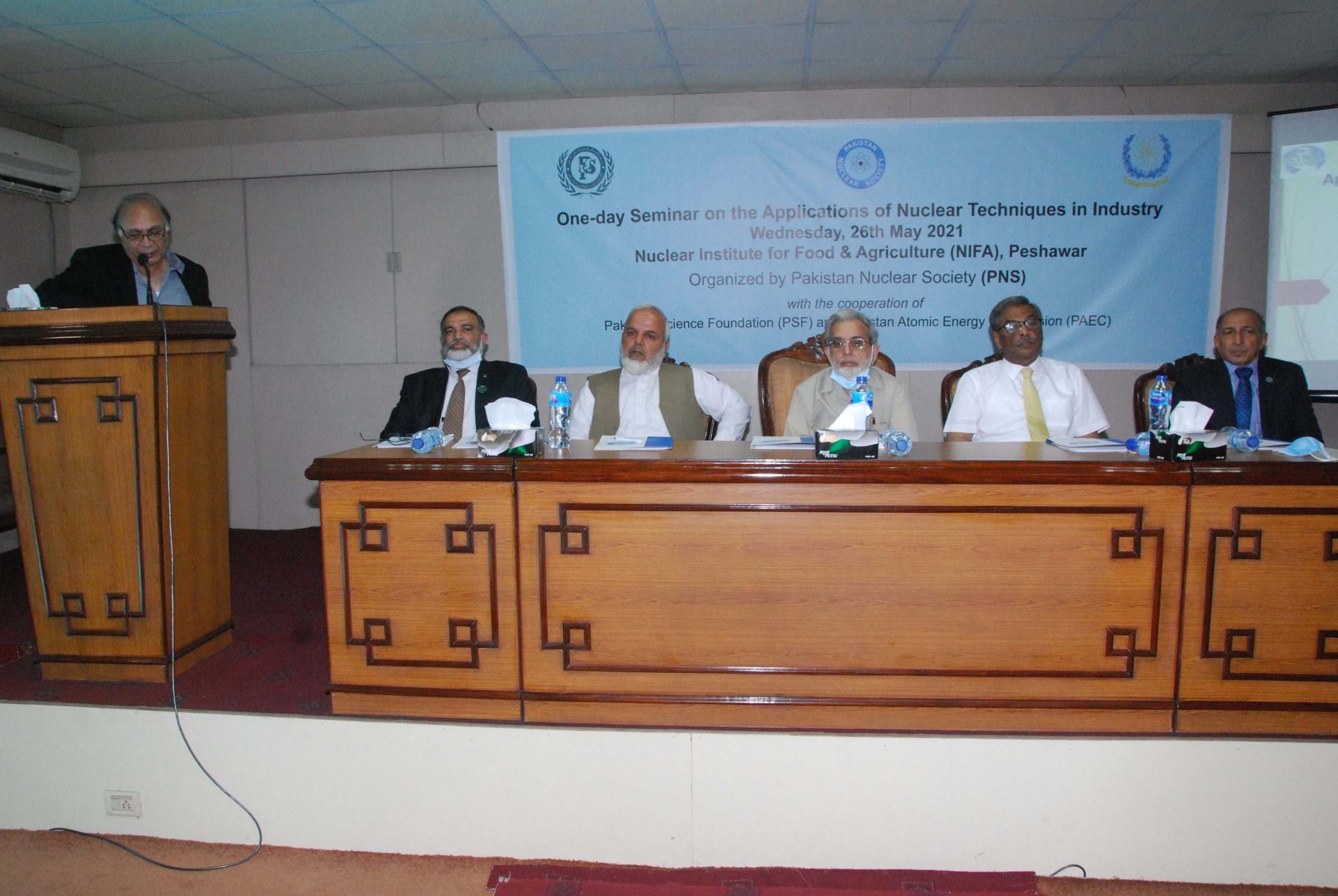 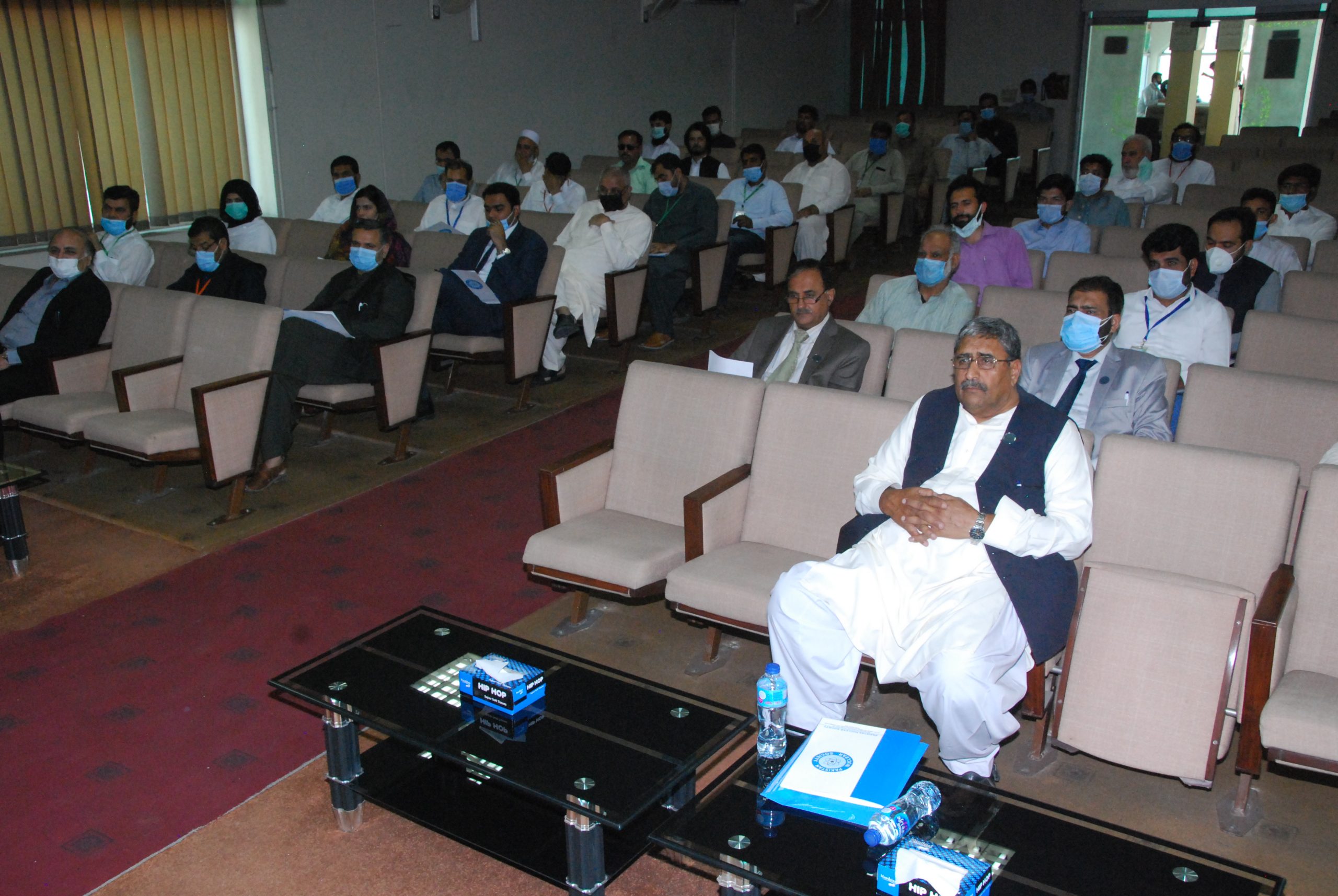 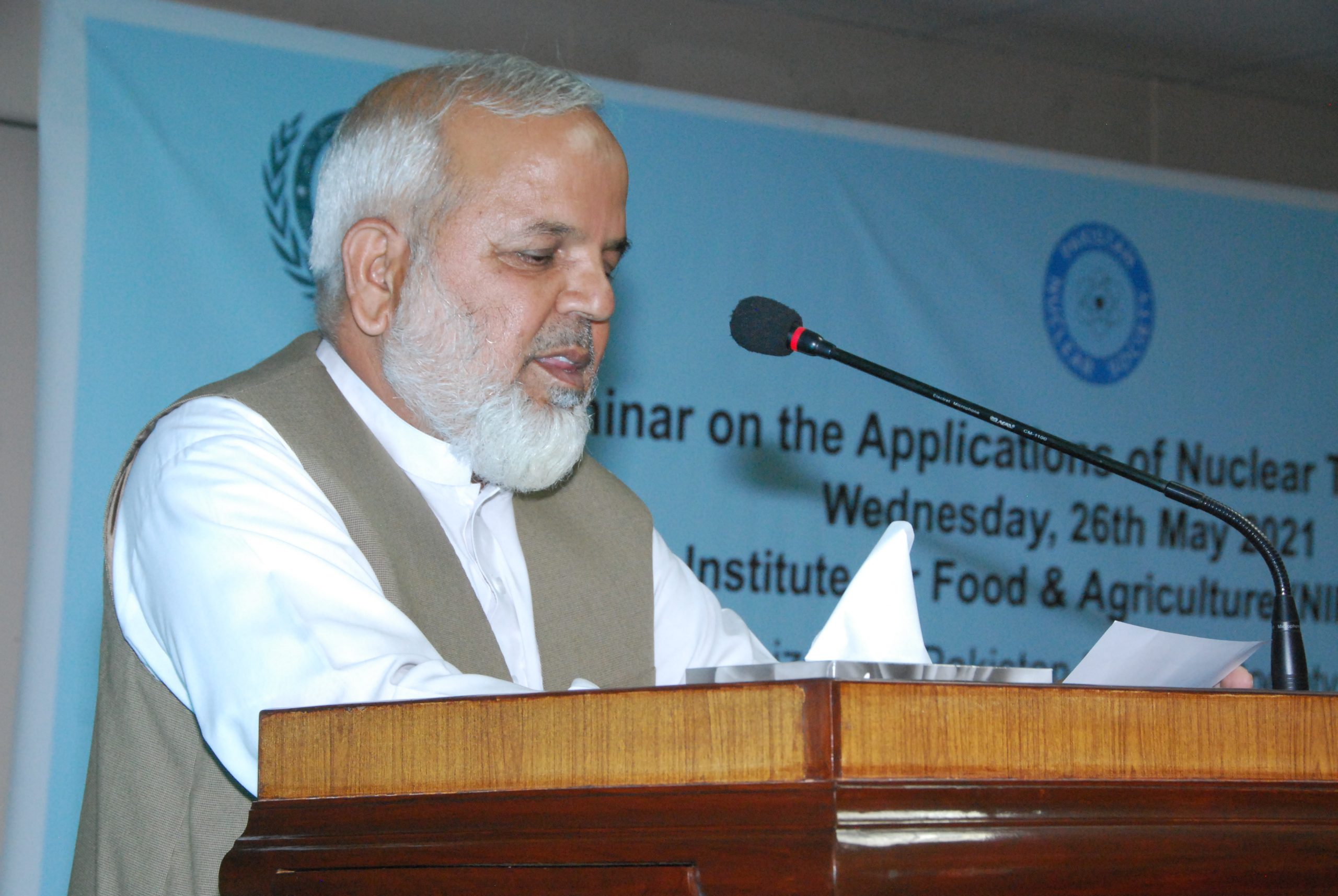 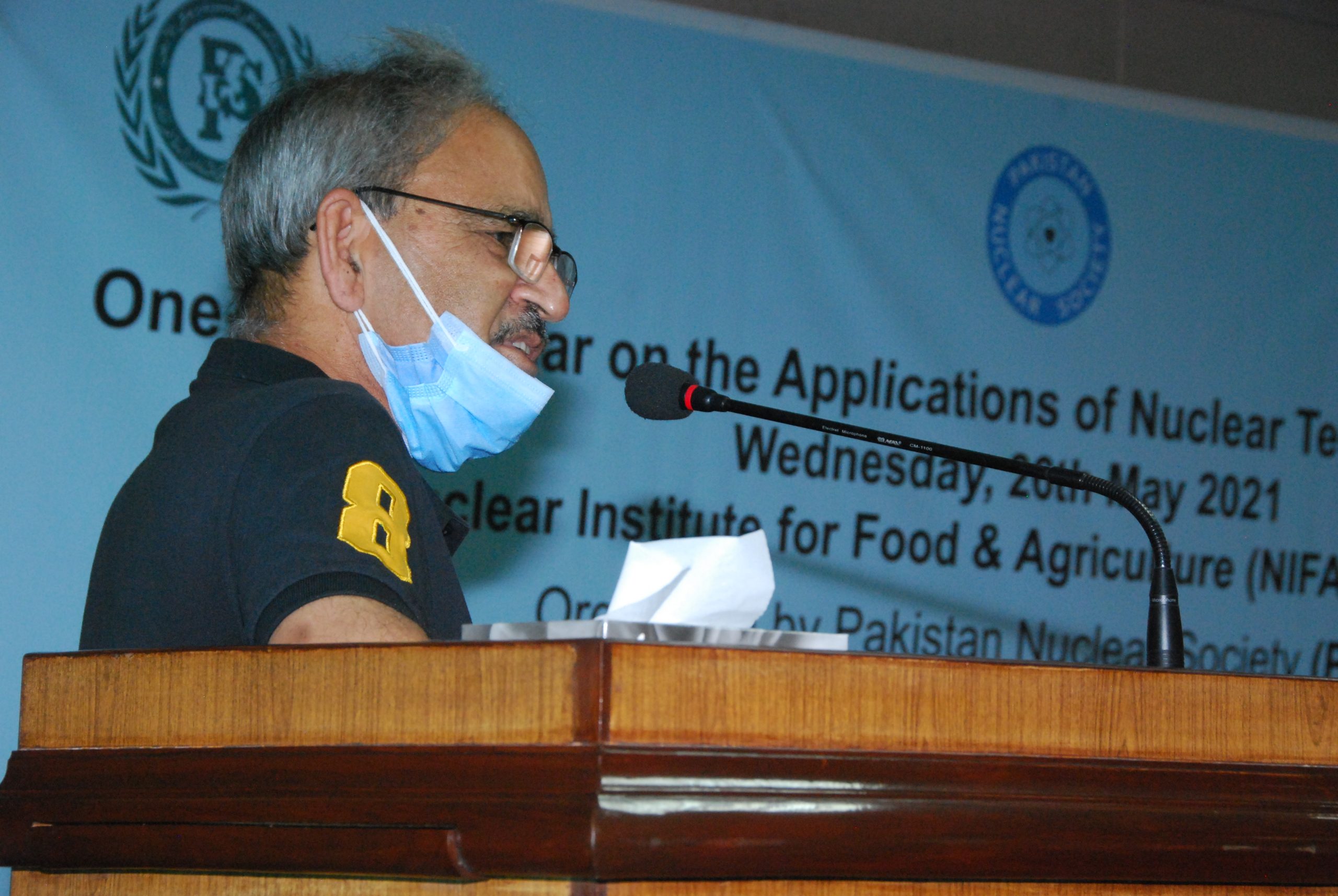 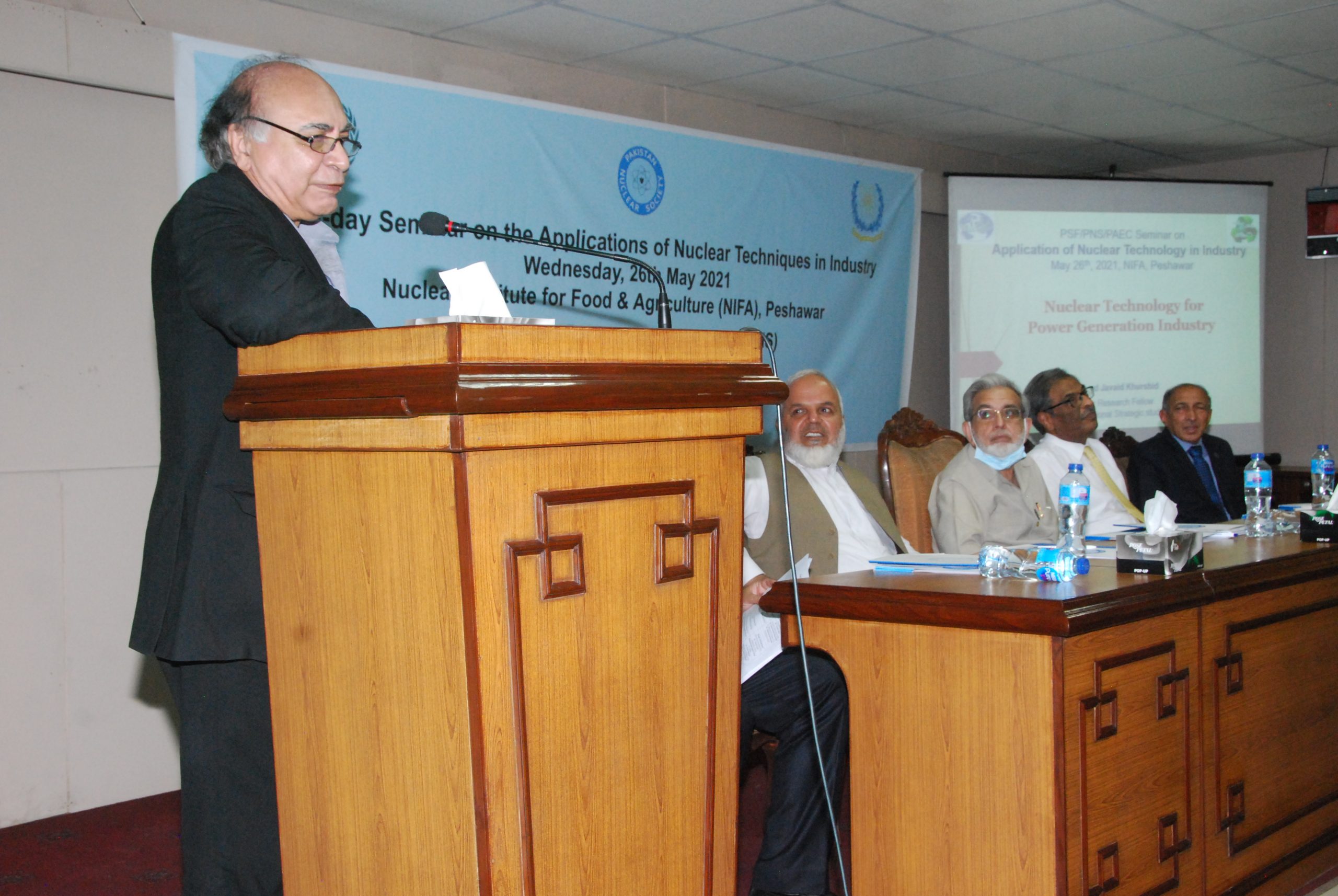 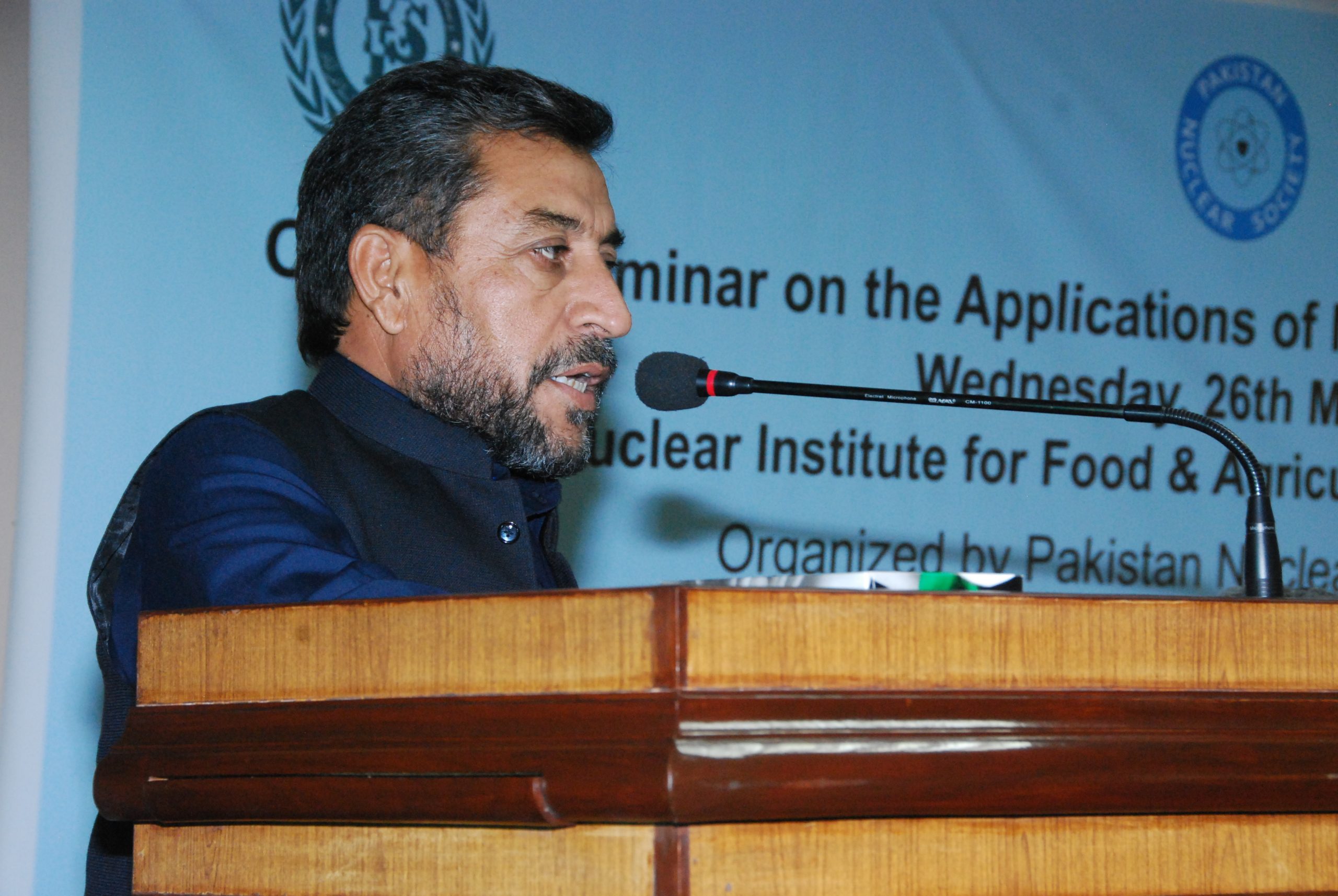 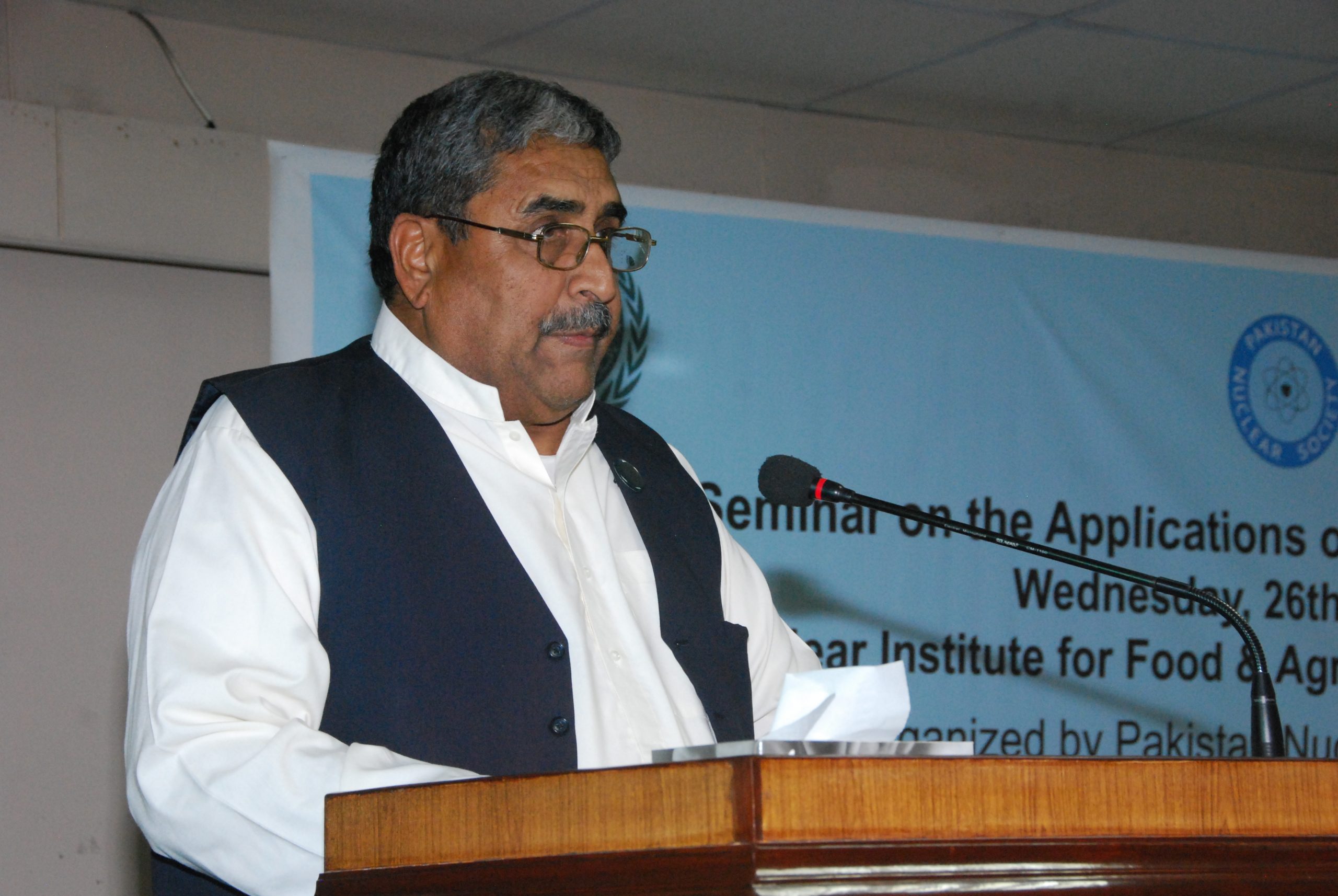 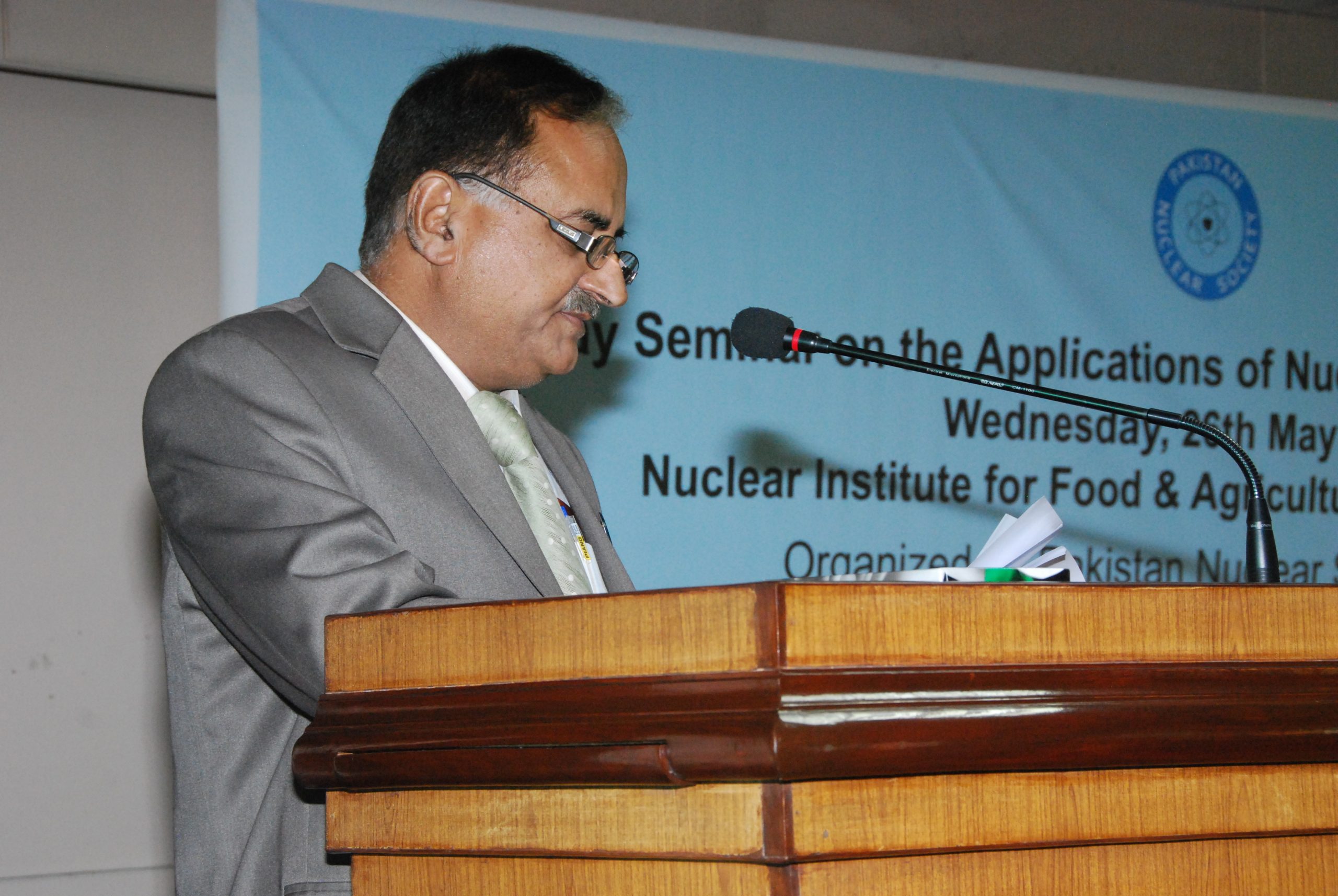 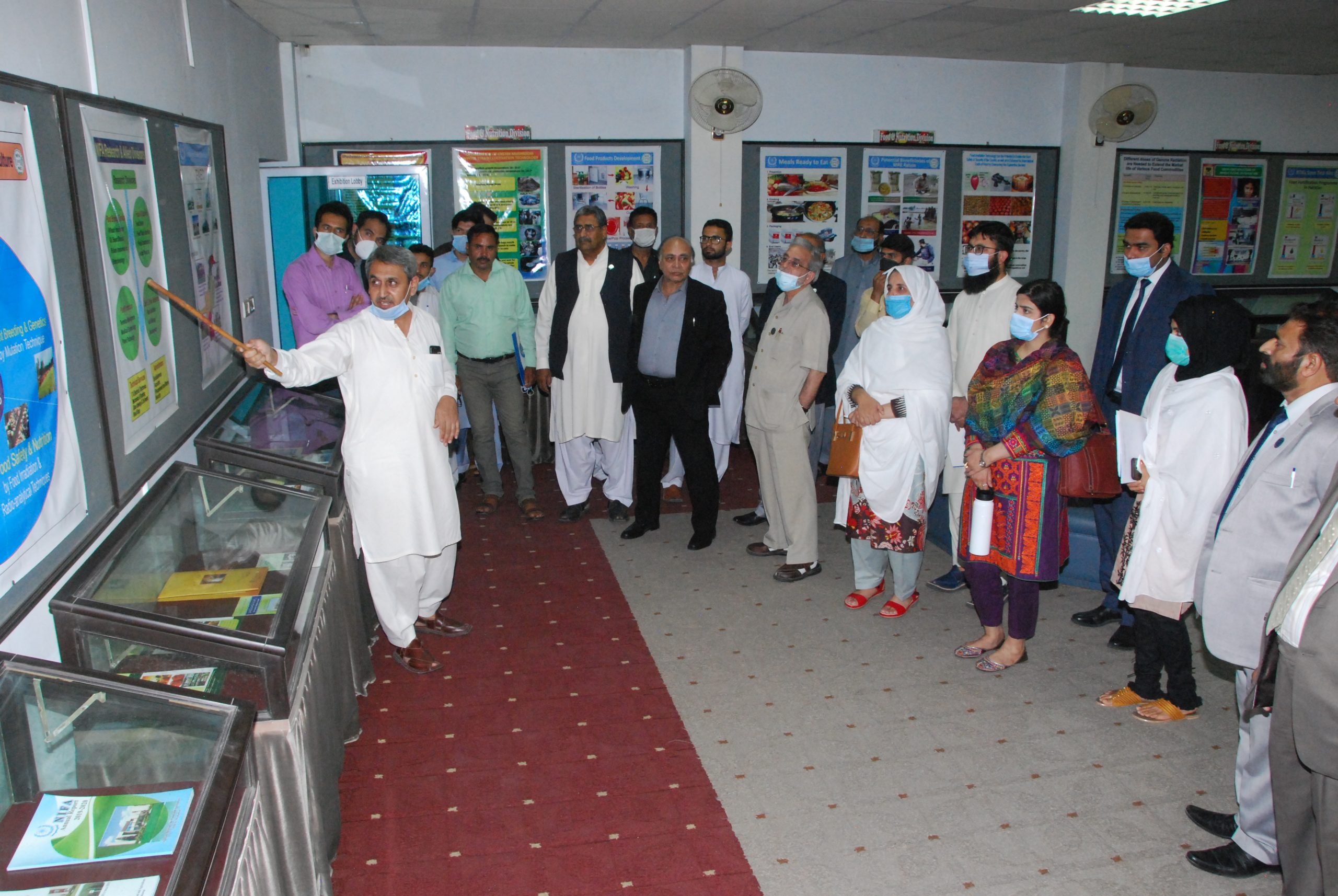