The nomenclature of ‘Science Diplomacy’ (SD) has entered the lexicon of foreign relations discourse during the last decade or so, but the practices it entails has been in vogue since 1940s. The need for devising a taxonomy of ‘Science Diplomacy’ arose because of the increasing relevance of scientific knowledge in addressing global challenges. It necessarily meant that scientists are required to be closely associated with diplomatic community to inform and to educate on matter with strong scientific underpinnings, such as climate change, infectious diseases, genetically modified foods, cyber security etc. There are a variety of ways in which nations have embedded scientific inputs in their diplomatic endeavours, notably through training of diplomats to appreciate and absorb scientific ethos, on the one hand, and enabling scientists to provide data-based advice in relevant global or cross-boundary issues.

A seminar on the topic was organized by Pakistan Nuclear Society with the support of the Virtual University of Pakistan on 25th June 2021, in order to publicize Pakistan’s achievements in Science Diplomacy and to highlight the developments taking place else where in the world. Considering the wide variety of audience, including the students, which were expected to join the webinar, it was consider appropriate to start off with an introductory talk on SD. The first speaker, Dr. Arshad Saleem Bhatti, Rector Virtual University of Pakistan, elaborated the basic concepts of Science in Diplomacy, Science for Diplomacy, and Diplomacy for Science.With specific examples derived from success stories such as CERN project of European countries, he emphasized that Scientific cooperation can lead to political reconciliations. The second talk, entitled “Building Gaps through Science Diplomacy: Pakistan’s Perspective” was delivered by the former Secretary General of Pakistan Academy of Sciences, Prof. Dr. Muhammad Aslam Baig, who elucidated the role played by ‘AbdusSalam International Centre for Theoretical Physics (ASICTP)’, in providing the interactivity between scientists from developed and developing countries.

He also cited the project “Synchrotron light for Experimental Science and Applications in the Middle East (SESAME)” as a fine example whereby even the scientists from bitterly rival countries can work together. An illuminating talk by Prof. Dr. Raheel Qamar, Head of Science and Technology Sector, ISESCO, dilated upon how Science Diplomacy played out in the world during the outbreak of Covid-19 pandemic. It involved cooperation of multiple countries for preparing vaccines, but also highlighted the limitations of cooperation in the presence of national priorities. Recalling that diseases that did not affect Western hemisphere such as Ebola and Malaria were not given due attention by multinational pharmaceutical companies on profitability grounds, he stressed the role of scientific communities in developing countries to promote South-South collaboration. He gave several examples of how ISESCO has been helping OIC countries in scientific capacity building.

The Director General of ‘Science Diplomacy Division’(SDD) in the Ministry of Foreign Affairs of Pakistan, Mr. Muhammad Kamran Akhtar, spoke at length about the initiatives of Pakistan’s Foreign Ministry in projecting Pakistan’s scientific achievements at international fora and helping local industry in addressing their import-related issues. He lauded the services of Pakistan Atomic Energy Commission for deploying nuclear technology in support of 9 out of 17 Sustainable Development Goals. Mr. Kamran was of the view that SDD is well-placed to use its resources for projecting soft power of Pakistan. The efforts to improve Pakistan’s image abroad will be continued through dissemination of information about achievements of our scientists, such as the recent IAEA award won by Pakistani scientists of Nuclear Institute of Agriculture and Biology (NIAB).He informed the audience that Science Diplomacy ‘Focal Points’ have been nominated in Pakistan Embassies in most capitals, who are responsible for reporting on the measures taken by the relevant embassies to find opportunities of S&T cooperation.

LAHORE: Pakistan Nuclear Society in collaboration with Virtual University of Pakistan, Pakistan Academy of Sciences and Ministry of Foreign Affairs held a webinar titled “Science Diplomacy” which was attended by hundreds of students and professionals from all over the world.

Most of the developed countries have initiated science diplomacy forums not only for their own benefits but also to help the developing countries. “Some of the examples are Fulbright scholarship and Erasmus Mundus scholarship, our students must avail these opportunities to rise in the field of science,” the VU rector said.

“Our main objective under science diplomacy forum is to bring diplomats and scientists under one umbrella,” he said. He said that most of the countries were integrating science into their foreign policy. He also raised a point that coordination between foreign policy and international agencies was quite important. Science diplomacy should be used to express national power or influence in equipping decision makers with information to support policy and to enhance bilateral and multilateral relations, he added.

ACDIS) Director General, Ministry of Foreign Affairs, Muhammad Kamran Akhtar Malik spoke on Pakistan’s perspective on science diplomacy. He said that throughout history scientific advancements had been shaping and transforming powers of states relative to each other. He said the 1961 Vienna Convention on Diplomatic Relations, defined the functions of diplomats, which among other things, included promotion of scientific relations between states. Ministry of Foreign Affairs has certain advantages in terms of scientific collaboration at the international level as well as bringing stakeholders together at the national level. He told the audience that Ministry of Foreign Affairs had established a group on vaccine production which would be looking at various options for improving Pakistan’s access to vaccines through international collaborations. He said the government had also announced 3 million dollar COVID-19 assistance for SAARC countries.

The government of Pakistan is providing COVID-19 related assistance to SAARC countries, including equipment such as ventilators and CPAP machines as part of the science diplomacy initiative. Professor Dr Raheel Qamar, head of science and technology sector, ISESCO Morocco, said ISESCO was UNESCO of the Islamic world and its main focus is capacity building of Muslim students. He said, “We recently announced a prize money of hundred thousand US dollars for those scientists who will develop COVID-19 vaccine or any therapy to cure this disease. For capacity building, we are also forming a partnership with NASA and Space Foundation of United States of America.” Pakistan Nuclear Society President Dr Imtinan Elahi Qureshi presented his viewpoint on “Science Diplomacy-The Global Scenario.” He briefly described the actions taken worldwide to implement science diplomacy agenda, evolution of conceptional framework of science diplomacy and upcoming issues. 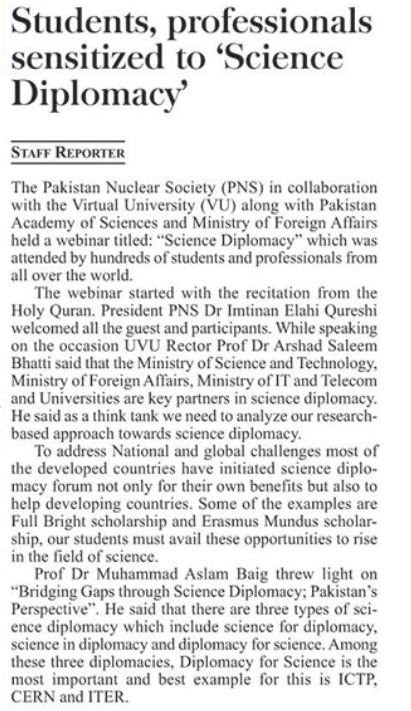